“Israel is the one true safe place for Christian life in the Middle East,” Father Gabriel Nadaf, an Israeli Greek Orthodox priest, stated at a November 17 Endowment for Middle East Truth (EMET) presentation on Capitol Hill.  Nadaf’s visit to Washington, DC, sounded a clarion call for Christians and Jews to recognize a common fate in the face of Middle Eastern Islamic threats.

Nadaf was born in Nazareth, then a majority-Christian, now a majority-Muslim city, Jesus’ home and the place where the Bible recounts Nadaf’s namesake, angel Gabriel, appearing to Jesus’ mother Mary.  At a subsequent November 18 presentation at The Israel Project (TIP), Nadaf emphasized in comments translated from Hebrew that he and other Israeli Christians speak Arabic, but “not because they are Arab.”  Rather, an “Islamic caliphate erased their identity” in past “Islamic conquest.”  In an interview immediately following The Israel Project event, Nadaf preferred the term “Aramaic Christians” and advocated that they preserve this language of Jesus. 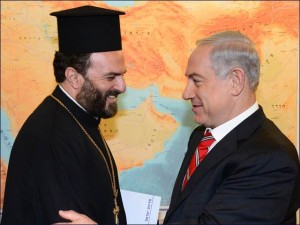 The Middle East’s “soil is…soaked with the blood of Christians” killed by Muslims because Christians “believe in a different faith, a faith with a universal message of love and peace,” Nadaf told EMET.  “What are we getting from the other side” in response to this message, Nadaf asked at The Israel Project.  “You give love and you get a knife in return” from a Muslim.  “You give forgiveness, you get hate, because you are different from him and you don’t believe in his path,” the “only…correct path.”

In Islam killing nonbelievers is a “mitvah…a blessed commandment” for those who think “it’s good to die” in “jihad…as martyrs” and receive 72 virgins. Dialogue with Muslims “is only temporary to calm the waters.”  “I love them very much, but I won’t let them kill me,” Nadaf concluded.

“Very painful numbers” illustrate Muslim oppression of Christians in Palestinian territories next to Israel, Nadaf observed to EMET.  Jesus’ birthplace Bethlehem, once a majority-Christian city, is now only 2% Christian, while 1,500 Christians live in Gaza, the “home of Hamas,” Nadaf noted at The Israel Project.  Muslim-Christian tensions also played a role in reducing Nazareth, Israel’s Christian population to currently 35,000 among 85,000 residents, the interview added.  For those who would blame Israeli “occupation” for Christian flight, Nadaf asks “why are only the Christians leaving the occupation?”  While Christians often denounce Israel, this is usually the result of fear of a Muslim majority.

An audience member’s question about “people of good faith and decency” in all religions, like the “righteous gentiles” who aided his Jewish ancestors in Nazi Germany, left Nadaf cold.  Nadaf referenced in response Christians in Iraq bewildered by the betrayal of Muslim neighbors who identified Christian homes for Muslim marauders with a painted Arabic letter “Nun” for “Nazarene,” Christian in Arabic. “The Muslims that don’t believe in that path became Christian,” Nadaf argued.

Islamic “ideology” seeks a “Muslim caliphate” as “controller of the world,” Nadaf stated in his interview.  Thus “there will always be conflict and tension in the region” towards the Jewish state of Israel and Christians under Islam’s discriminatory dhimmi stipulations.  Christians “will always be considered as second to” Muslims, who “won’t ever accept them as equals.”  “I don’t see a solution” until the New Testament’s “end of the world,” Nadaf pessimistically prophesied.  Relations with Israel’s 1.3 million Muslims, the majority of the country’s Arab population, meanwhile, are different, because a Muslim “is not the one in control in Israel.”

“Christians have freedom” only in Israel, along with a “very good relationship” with Jews and a high standard of living shared among all Israeli Arabs, including “villas and mansions,” Nadaf said before EMET.  Israel’s Arab “Muslims have villas with stones that even Jews could not afford,” Nadaf elaborated in his The Israel Project  interview.  “No Islamic country or power has ever offered before” what Christians have received from Israel, Nadaf stated to The Israel Project .  Accordingly, Israel’s Christian population has grown from 57,000 in the 1970s to 160,000 today, despite a relatively low birthrate.

Christians and Jews “must join arms to protect each other” against a common Muslim threat, Nadaf declared to EMET while answering a question via Hebrew translation.  “Our fates are the same and we must coexist and work together,” Nadaf added at The Israel Project , given persecution against Christians today and Jews throughout history.”  “Born from Judaism,” Christianity’s “roots are connected to the Holy Land in Israel,” Nadaf stated in describing a Judaism Jesus “came to continue and not replace.”  Christians have a “joint faith” with Jewish “partners,” whose “faith and our faith” is “one and the same.”  A “Christian…must believe in the Old and the New Testament,” anything else is “opposition to Christianity.”

Judeo-Christian unity motivated Nadaf to help found the Israeli Christian Recruitment Forum advocating Christian volunteer enlistment in the Israeli Defense Forces (IDF) in 2012.  While such enlistments had previously annually averaged about 30-35, by 2013 150 Christians had joined the IDF, more than 20 of them female and over 90% going to combat units.  “Arab Spring” atrocities against Christians, described by Nadaf at The Israel Project  as a wakeup call for Israeli Christians, provided a particular impetus.  Christians should “be able to serve the army of the country they live in” and “protect the Holy Land…from terror.”

“Israel is a Jewish and democratic state…a country of all its citizens,” to which “Arab citizens need to be more loyal” and not subversive while they “live on my bill,” Nadaf argued at The Israel Project .  “Where exactly is apartheid?” Nadaf retorted in his interview to this modern condemnation of Israel, noting Arab parliamentarians, judges, hospital directors, and university professors there.  “It’s all just a lie and propaganda.”

A recent territory exchange proposed by Israel to the Palestinian Authority (PA) involved a triangle area in northern Israel that is “completely 100% Muslim” where residents have consistently complained of “apartheid.”  Yet the proposed swap provoked almost unanimous protests in the area.  “So, on one side they are attacking the country, but on the other hand they are obviously enjoying it.” Nadaf criticized.  “What do they want?”

As a godly “religious man,” Nadaf “must say the truth first” and “serve his people…even if he has to pay a heavy price.”  For Nadaf, that price has come in the form of threats, such that two Catholic priests who cofounded the recruitment forum left after intimidation.  Nadaf’s son also suffered an attack with a rod (“It’s a miracle that he was saved,” says Nadaf) and now has a $300,000 bounty on his head.

“Terror does not differentiate between people…in a war of ideology and religion…to make the entire world bow to sharia,” Nadaf warned to those beyond Israel at The Israel Project .  “I ask you not to be naïve,” for Israel’s defeat “will be a disaster for the world.”  “Don’t weaken Israel…Don’t boycott,” because this “will sign the death warrant” for Middle East Christians.  Criticize Israel only “with great wisdom.”

Nadaf saw a “historic sin” in deficient Christian concern around the world for their persecuted Middle East brethren.  “Christians have forgotten the message of St. George,” Nadaf stated before EMET while noting a man from the Holy Land, where many churches bear his name today, who died protecting Christians in the Roman army.  A “world that flies the flag of human rights should not support Islamic states that violate every human right,” Nadaf cautioned in discussing foreign aid.  While Nadaf supports “honest…real education” in these countries, foreign aid in Gaza has built “terror tunnels.”

A recent Muslim prayer service in Washington, DC’s National Cathedral also provoked Nadaf’s concern.  “I don’t agree with this.  OK.  Sorry,” Nadaf flatly responded to a The Israel Project  audience question.  Nadaf cited in his interview Istanbul’s Hagia Sophia, once a cathedral, then a mosque under the Ottomans, and an account of Caliph Umar ibn al-Khattab refraining from praying in the Church of the Holy Sepulcher after Jerusalem’s Muslim conquest.  The distinct history of these two churches manifested the Muslim doctrine that Muslim prayer on a given site entails a right to build a mosque there.  “I just don’t understand those Christians that don’t understand what the other is thinking,” Nadaf complained.

Nadaf decried a “global witch hunt” whereby “much of the international community chooses to single out and criticize Israel,” he stated to EMET.  “Incessant lies and demonization” hide Israel’s “very diverse fabric,” said the Israel Forever Foundation’s Heidi Krizer Daroff in introducing Nadaf to EMET.  As noted at The Israel Project , though, Nadaf spoke politically incorrect “Emet,” Hebrew for “truth.”

All In The News Israel Middle East Radical Islam